Beer Spa in Prague: What It’s Really Like Soaking in a Bath Tub Full of Beer

Instead of soaking in a painful tub of fiery Cheetos, I would be soaking in a soothing tub of one of my favorite beverages: beer, and I would be doing it at a beer spa in Prague.

I didn’t think twice before booking.

I was ready for my first ever, all-around awesome Prague beer bath experience.

What is a beer spa you ask? Well, the name is pretty self-explanatory. It’s a spa revolved around beer. You soak in a beer like mixture, you drink beer and you eat snacks made with beer (which will usually be beer bread).

One misconception a lot of people have is that you are actually soaking in beer. This isn’t too far off, but not true. You are soaking in warm water, brewers yeast, and malt which are beer ingredients, so close enough. 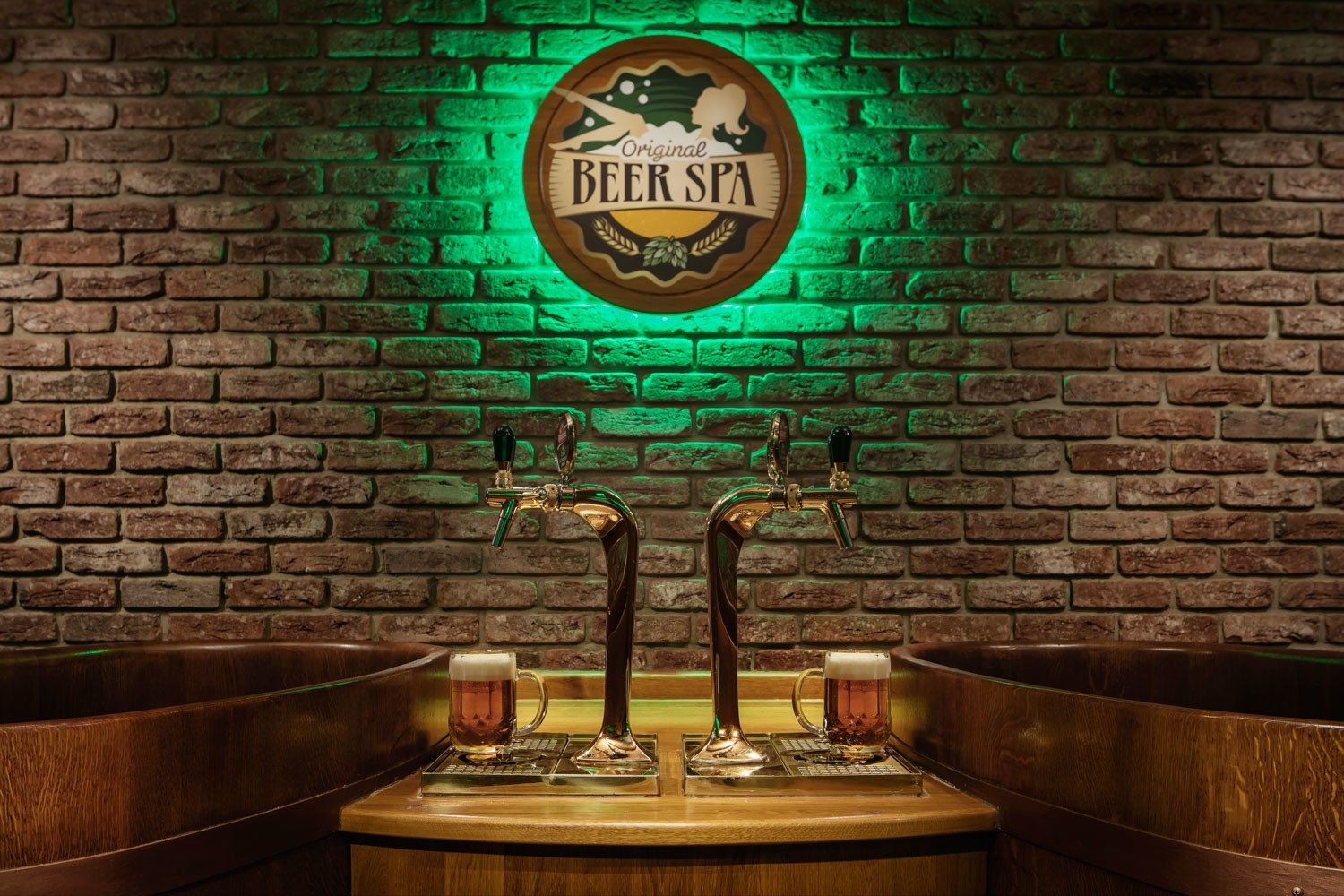 What to Expect at the beer spa in Prague

Here’s what my experience was like at the Prague beer spa.

As you can imagine, I was pretty eager and excited about the beer spa, so much so that I couldn’t help taking a big whiff of the pungent yeasty odor wafting in the air when I walked through the front door of the lobby.

I was then greeted by an attendant who took me to my room. She mixed up the bath in front of me, showing me the ingredients she would be using and explaining everything I’ll need to know about the spa.

Since I wasn’t finished with my beer they allowed me to finish the rest of it in the lobby. 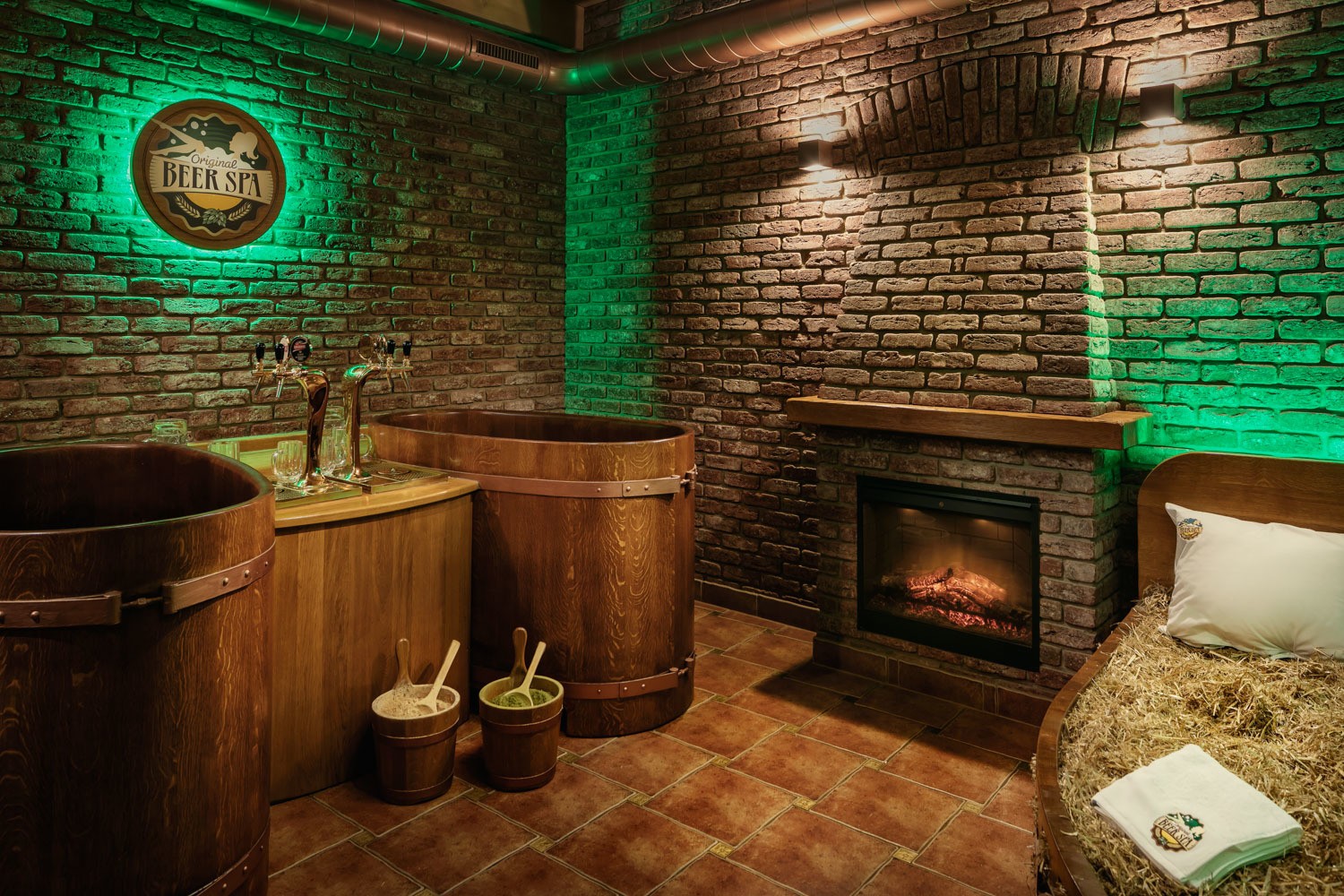 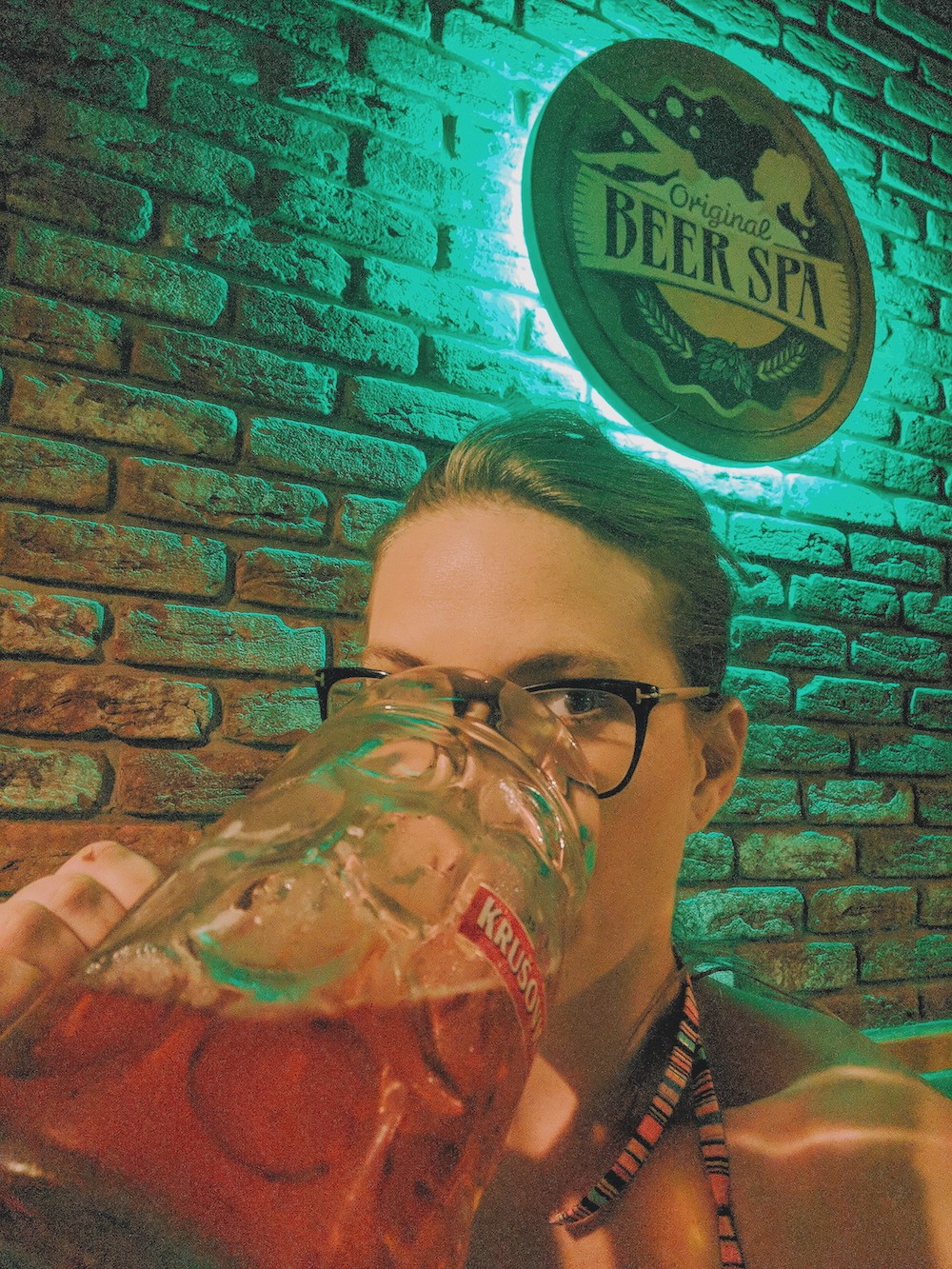 How to Book Your Beer Spa in Prague

What to Bring to the Beer Spa in Prague

All you really need to bring is your swimsuit and even that isn’t necessary. A towel, sheet, linen blanket, and slippers are provided for you.

Since I was one person I only had to pay 87 euros and that’s by hour.

As you will notice, most of the beer spas are in the Czech Republic, but if you can’t get there, no worries! There are plenty of other options.

Eat Before: Chances are, you’ll be drinking a lot, so don’t do it on an empty stomach. They do serve a small portion of beer bread, but it won’t be enough to sustain you. Confinue refilling your glass, even if you still have some: The time you are in the spa will go by quickly and before you know it, you’ll be out of there! They do allow you to finish your drink in the lobby once your time is up, but you should make it a rule, every 5 minutes fill it up again! Bring a change of clothes: There is nothing like the feeling of clean clothes after a bath. It won’t hurt to be prepared with an extra change of clothes or at the very least a fresh pair of undies.

This beer spa was such a cool and unique experience and I would do it again in a heartbeat! It’s a fun activity to do alone or with friends and who knew soaking in beer could have health benefits?

First off, if you want to browse all my favorite travel resources check out my Travel Resources page.

Trip Planning: I have put together the ultimate trip planning guide that will walk you through everything you need to know to plan your perfect trip.

Book your Flight: Check out Skyscanner and Momondo! They can have great deals. Airfarewatchdog is also a favorite of mine. I get notified by email every time there is a good deal from my local airport.

Book your Transportation: Wanderu is usually where I check first. They check hundreds of different transportation companies all over the world and find you either the best bus or train deal. Flixbus is one of my favorite cheap options for Europe. The buses generally aren’t too bad and they go to most countries around Europe. It’s the perfect option for short distances. Train travel is my favorite mode of transportation and I always use Rail Europe to book my tickets. The Eurail pass makes Europe train travel super affordable.

Book your Accommodation: On a budget and looking for cheap accommodation? Hostelworld is my preferred site to book cheap and reliable hostels. Hotels Combined compares hundreds of sites to give you the cheapest hotel deal. If I know the hotel I want to stay at, This is the site I generally use. Hotwire has a fun mystery to it. It’s a great site to use for last-minute bookings. They don’t actually tell you the name of the hotel when you are browsing. You will just get the area of the city it’s in, the price, and how many stars it has. I love the surprise aspect of it!

Click here to preview your posts with PRO themes ››

Book your Activities: Now, you have planned all the logistics time to think about what you will do once you get to your destination! These are a few of my favorite trip planning sites. I always use Viator when I am looking for tours. I have booked cooking classes, day tours and so much more through them and absolutely love the immense selection they offer in cities all over the world! Pinterest is great to get travel inspiration and plan an upcoming trip or share inspo with friends and family. I use Trip Advisor to plan itineraries for what I want to see & do in each city. I also use them to read reviews on restaurants and hotels too.

Click here to preview your posts with PRO themes ›› 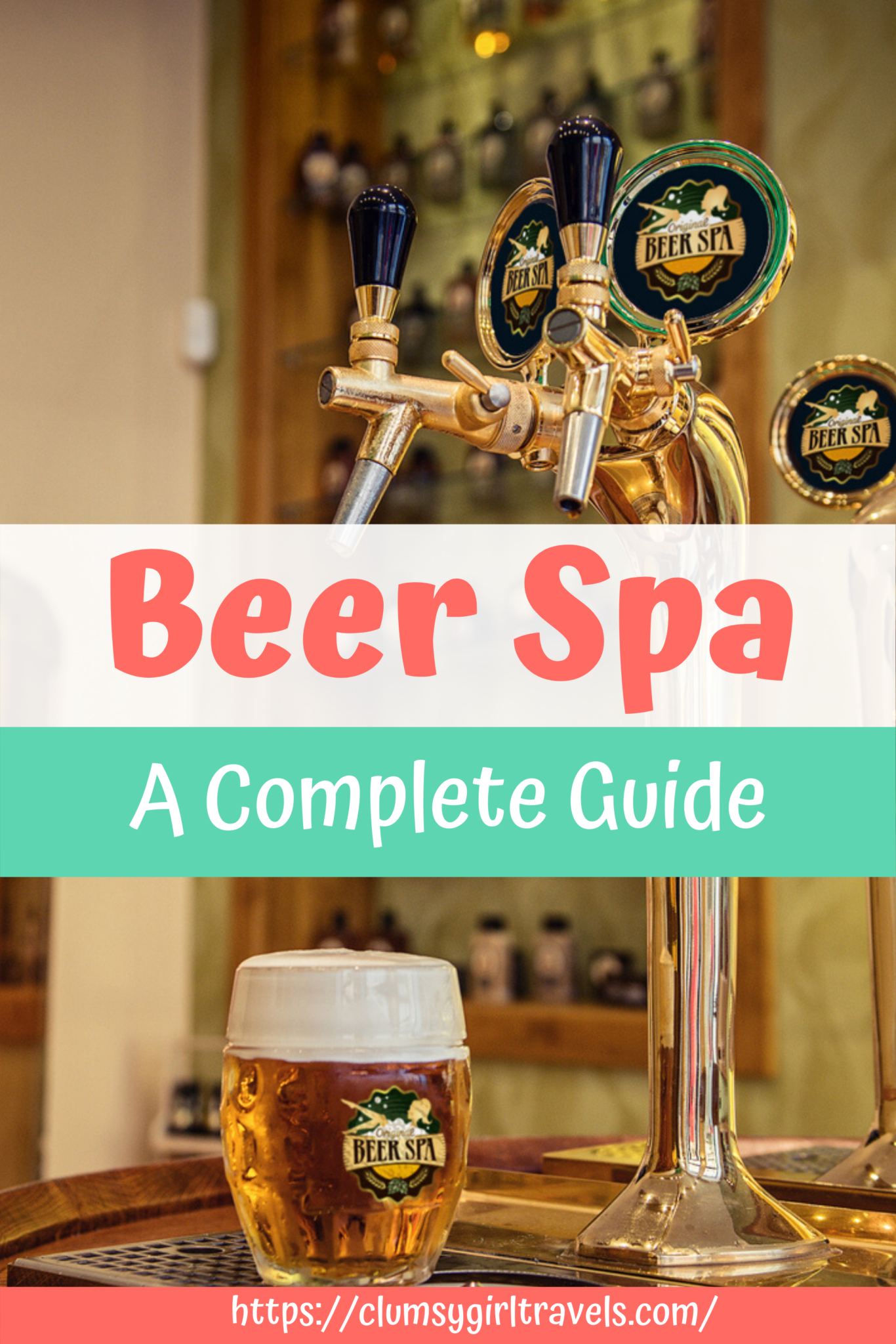 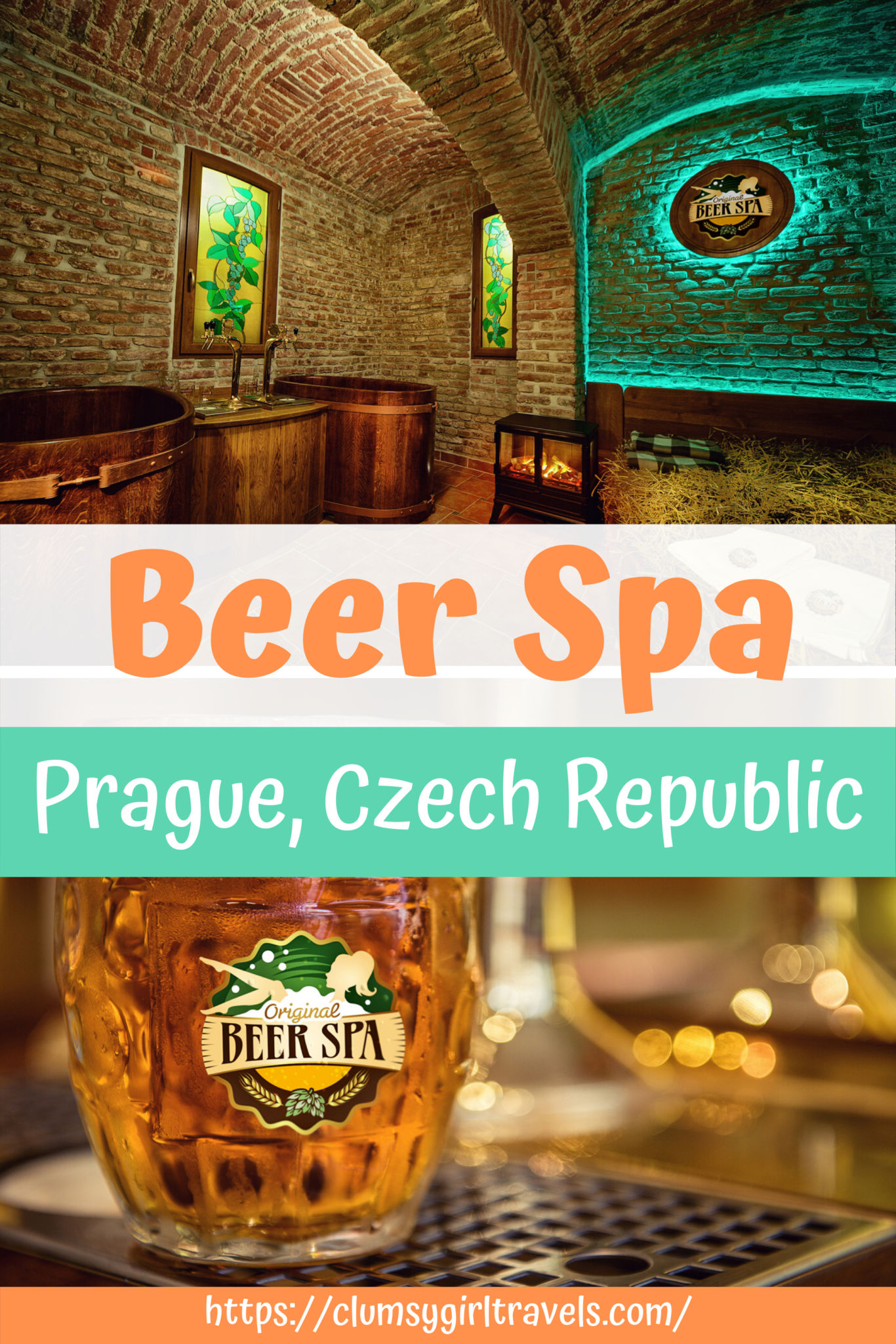 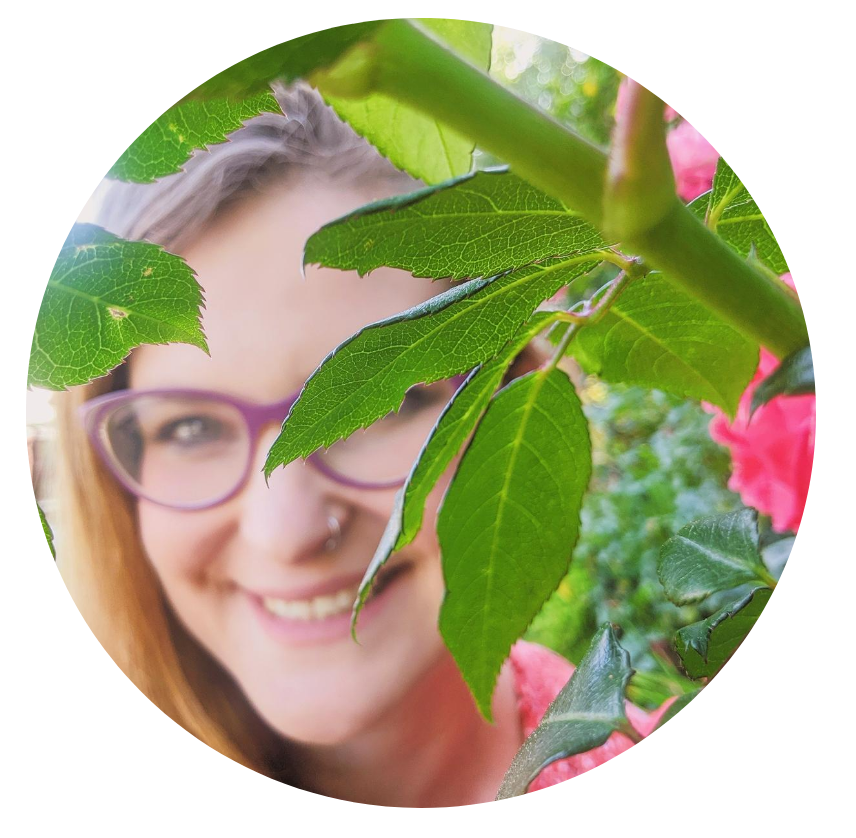 Hey! My name is Marika and welcome to my blog where I share my clumsy adventures around the world, visiting unique and offbeat places with a side of humor.